As the auteur behind Touki-Bouki and Hyenas, Djibril Diop Mambéty is a giant of Senegalese and African cinema. In the mid-1990s, Mambéty embarked on a planned trilogy entitled “Tales by Ordinary People,” though he only finished two before his premature death in 1998. This scree 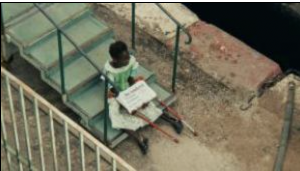 ning pairs these mid-length featurettes, both marked by a rich sense of humor, gorgeous street music, and an affectionate yet acute eye toward the poor and how they navigate cutthroat economies. In Le Franc (1994), a penniless musician glues a lottery ticket to his door, hiding this splurge from his landlady—but when the ticket actually wins, he must rip the door off its hinges and trek into town. The Little Girl Who Sold the Sun’s title is itself a sly pun, for it follows a disabled street girl who sells newspapers (“Buy the Sun!”) on Dakar turf ruled by troublemaking boys. Each film’s plot possesses a parable-like simplicity, yet Mambéty conjures a sense of bustling, bounteous life, barely contained by the frame. (ZZ)