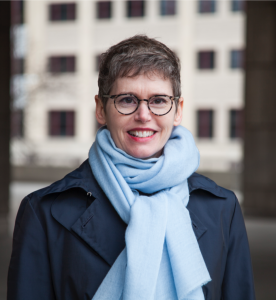 Kelley Conway is Professor of Film in the Department of Communication Arts. She currently serves as Chair of the Department and Artistic Director of the Wisconsin Film Festival and the UW Cinematheque. Conway is the author of Chanteuse in the City (University of California, 2004) and Agnès Varda (University of Illinois, 2015) and has also published articles on popular music in classical and contemporary francophone cinema, the installation art of Agnès Varda and Jean-Luc Godard, the American reception of Brigitte Bardot, and on genre and gender in recent French art cinema. Conway created “Film in Paris,” a month-long program devoted to the study of film history in Paris, and organized the inaugural program of “Film Scholars at the Telluride Film Festival,” a program for graduate students in UW-Madison’s Department of Communication Arts. Her research interests include French film aesthetics and culture. She is currently at work on two projects: postwar French film culture and the documentaries of Agnès Varda.