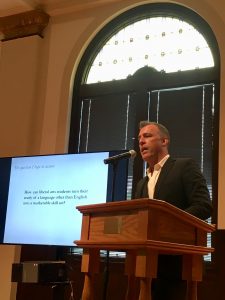 Ritt Deitz directs the Professional French Masters Program at the University of Wisconsin-Madison, where he teaches professional communication, research methods, corporate social responsibility, and Quebec culture and society. He edited the 2010 essay collection, Post-Francophile: Stories from the Professional French Masters Program, and its 2014 follow-up, Francophonia. He has also published in French: a 2010 musical comedy, La Colonie, about a fictional invasion of Wisconsin by Quebec, and a short story collection, Rêver local (2013). His blog (thehowtohumanist.wordpress.com) features essays on humanistic practices both inside and outside universities. In 2012 he was named Chevalier dans l’Ordre des Palmes Académiques by the French Republic.